Castle Town of Cherry Blossoms and Apples About Hirosaki City

Hirosaki City is located in a west side of the Aomori Pref. and one of the first cities to have implemented a municipal system in Japan.

Thus, developed as a castle town of the Hirosaki clan and the central city of the Tsugaru region.
It also forms the Hirosaki metropolitan area with a population of approximately 170,000 (as of 2020) that spreads to the surrounding local governments.

During the Edo period, it prospered as a castle town before the war. But during the war it served as the army capital of the 8th Division of the Army, and as a school capital including the former Hirosaki High School. After the war, the dissolution of the Eighth Division ended its function as a military city, but since the establishment of a national university, it continues to maintain its character as a school city.

Hirosaki City has the largest apple production amount in Japan, accounting for about 20%, and uses the apple-colored town HIROSAKI as its catchphrase, aiming to create a town that sticks to apples.

In addition, Hirosaki Cherry Blossom Festival that is held at Hirosaki Park are also known nationwide, and the phrase "Castle, Sakura and Apple Town" has been used since ancient times.

What Hirosaki City has??

Hirosaki is a castle town full of history and culture, and many historical buildings such as samurai residences and Western-style buildings have been designated as cultural assets. To protect Hirosaki castle, Zenrin-gai, where 33 Zen Buddhist temples reside, Shintera-machi Temples area of southwest, the northernmost five-storied Pagoda ”Saishoin”, Seigan-ji Temple in northwest were built. It is also the entrance to the Shirakami Mountains, which is a world natural heritage site, and it is located about 60km northwest of the Oirase Stream of Lake Towada.

This is held in the park that now covers the former castle site. The average temperature in April is 8.0℃. From late April to early May, when the cherry blossoms are in full bloom, the maximum temperature is around 15°C and the minimum temperature is around 5℃. When you go to see cherry blossoms such as Hirosaki Castle and Mt. Iwaki, we recommend carrying one jacket with you. After the middle of May, when the apple flowers are in full bloom, the average maximum temperature exceeds 20°C, and the season is refreshing. During this time, it is safe to wear light clothes during the day, but also good to carry a jacket.

The "Hirosaki Neputa Festival", which has been designated as an intangible folk cultural asset of the country, is held from August 1st to 7th. At the end of the festival, it suddenly cools down and marking the end of summer. You can wear T-shirts and long sleeve shirts only during the day.At night, it will be below 20℃ and it will be cold, so prepare a cardigan and long-sleeved shirt.

The average temperature in September is 20℃. The heat subsides and becomes a little chilly in the morning and evening. The peaks of the autumn colors of Mt. Iwaki, called Tsugaru Fuji, are filled with color, and at the end of the season the autumn colors fill the beautiful mountains.

The autumn leaves in Hirosaki Park, where 1,000 maples trees and 2600 cherry trees turn red, are in full bloom from mid October to mid November. You can also enjoy the apple picking experience from mid-October to mid-November at Hirosaki City Apple Park.

The average temperature in November is the same as that in January in Tokyo, so let's go out in cold weather with warm clothes.

Prepare down coats, mufflers, gloves, body warmers, and other small items, and be sure to take measures against the cold. Also, in case of snow, you should wear snow boots.

Winter in Hirosaki is also full of highlights. The Hirosaki Castle Snow Lantern Festival, which is lined with illuminations that light up western buildings in the city and about 300 various snow sculptures and snow lanterns, is now a winter tradition of Hirosaki.

There are also many Chinese New Year folk religion events unique to the Tsugaru region. 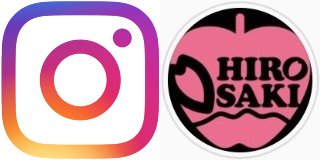